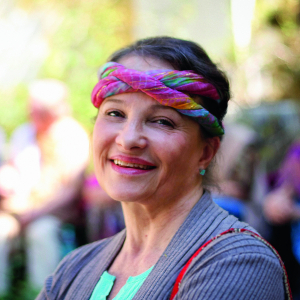 Judith Bourque was born and raised in the United States. She is an award winning filmmaker and holistictherapist. After graduating from Massachusetts College of Art with a Bachelor’s Degree in Fine Arts, she went to India to become a teacher of Transcendental Meditation, and then worked for the TM Movement for two years. She subsequently trained as a teacher of Re-evaluation Counseling, introducing that method to her country of residence, Sweden.

She also teaches classes in Dreams as a Source of Spiritual Guidance and Shamanic Healing. In 2003 and 2004 she returned to India to the Ashram of Amma Bhagavan where she completed their 21 day training to give the Deeksha transformation process.

She worked at SwedishTelevision for many years as a film editor, as well as producing and directing independent documentaries. Her films include the “Sowing for Need, or Sowing for Greed?” a documentary on genetically modified seeds, “The Real Patch Adams”, and “Hot and Cold Mandala”, an experiential infrared film. She has written a book about her love affair with Maharishi Mahesh Yogi, the "Beatles' Guru".